Knowledge Is Power - Arm Yourself

SIPTU was established in 1990 - with the merger of the country’s two largest unions, the Irish Transport and General Workers' Union and the Federated Workers' Union of Ireland. Both were founded by ‘Big’ Jim Larkin in the early years of the twentieth century. Until then most workers who wanted representation at work had to join a British based union.

Larkin founded the ITGWU in 1909 and it soon had branches in Dublin, Belfast, Cork and other centres with Liberty Hall as its headquarters. By the summer of 1913 the union had secured pay rises of between 20% and 25% for members. This provoked a vicious backlash from employers. In 1913 ITGWU members in Dublin were locked out along with workers in other unions who associated with them. The Lockout lasted six months but the employers failed to smash the union.

When Larkin went on a speaking tour in the US to raise funds, James Connolly became Acting General Secretary of the Union. He also took over command of the Irish Citizen Army, set up to protect strikers from police brutality during the Lockout. Larkin was unable to return to Ireland until 1923. In the meantime union members in the ICA participated in the 1916 Easter Rising under Connolly’s command. He is credited with drafting the Proclamation of the Irish Republic with Padraic Pearse, and it was printed in Liberty Hall on the eve of Rising.

Following Connolly's execution for his part in the Rising, the Union’s premises and records were seized by the British military authorities but ITGWU members refused to be intimidated. General President, Tom Foran and General Treasurer William O'Brien rebuilt the organisation which had 120,000 members by 1920, making it by far the largest union on this island. It played a leading role in the Anti-Conscription Campaign of 1918 that prevented young Irish workers being forced to fight for the British Empire in the First World War and also led the Motor Permits and Munitions strikes of 1920 against military occupation.

After Larkin’s return from the US friction arose between him and the new ITGWU leadership, resulting in a split and the formation of the Workers' Union of Ireland in 1924. Larkin led the new Union and both organisations played an important role in the economic and social development of the country despite the difficult climate of the depressed 1920s, and in the war-torn 1930s and 1940s.

The Irish Trade Union Congress split in 1945 and the move to re-unite the movement in the 1950s was spearheaded by young Jim Larkin, who succeeded his father as General Secretary of the Workers’ Union and by John Conroy, General President of the ITGWU. They succeeded in creating the Irish Congress of Trade Unions and they brought the ITGWU and the WUI to the brink of merger in 1969. However, the untimely deaths of both men - within weeks of each other - meant that the momentum towards amalgamation stalled and it awaited the efforts of a new generation to cement the historic merger in 1990.

The two founding unions of SIPTU have since been joined by other Unions including – the Irish National Painters' and Decorators' Trade Union (INPDTU), the Marine, Port and General Workers' Union (MPGWU), the Irish Print Union (IPU), the Irish Writers' Union (IWU) and the Automotive, General Engineering and Mechanical Operatives' Union (AGEMOU), Musicians Union of Ireland (MUI), Irish Equity, MLSA.

Since its foundation SIPTU has played a leading role in a number of campaigns to improve workers rights including a quadrupling of minimum statutory redundancy payments for workers losing their jobs, the establishment of the National Employment Rights Authority and the outlawing of mass redundancies by employers trying to replace existing workers with lower paid non-union labour. 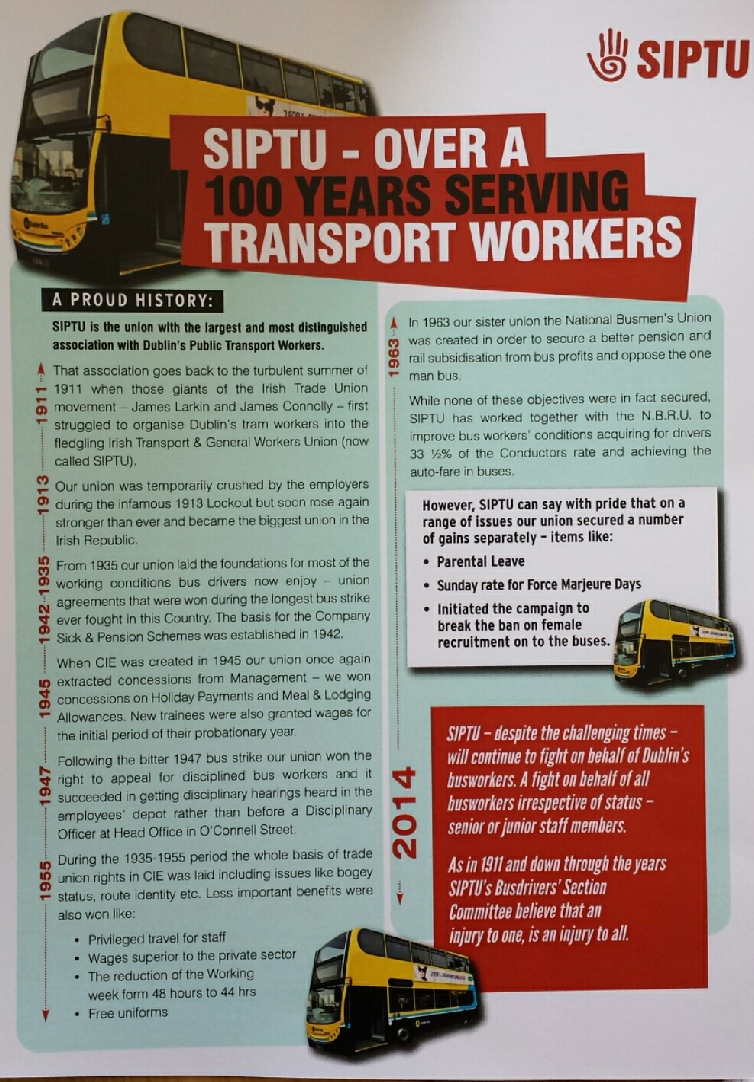